Who'd have thought Dishes of India housed in a dungeon-like setting in a nondescript strip mall would serve such delicious fare!

Sandwiched between a Subway and a bakery on Belle View Blvd in Alexandria, Dishes of India turned out to be a pleasant surprise.

We were desperately hungering for some good Indian food following disappointing experiences the previous day and after walking down the stairs into Dishes of India's dungeon we were understandably in a state of trepidation as to what fate awaited us.

Mercifully, Dishes of India dished out nice fare that for the most part found favor with us.

Some items like Kheer Pista and Masala Tea were so exceptionally good that for a few deluded moments we even considered selling our house and relocating to Virginia. ;)

Hey, even the ubiquitous and humble Dal Masala (Dal Makhani) turned out to be a flavorful treat at Dishes of India.

Most Indian restaurants in the U.S. are hopelessly inept when it comes to Dal Makhani, doling out finely boiled lentils floating in warm watery sauce devoid of any taste. 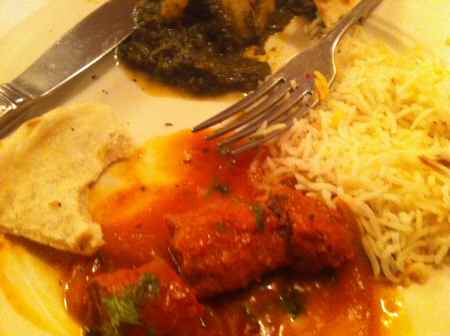 Seekh Kebab Masala prepared with sliced lamb rolls, onion, ginger and, garlic sauce was a dish fit for the Gods.

So smitten were we with its divine flavors that we heaped it again and again on our overladen plate.

The sauce had seeped well into the chicken making it very flavorful.

By now, we were now drooling at the embarras de richesse in front of us. 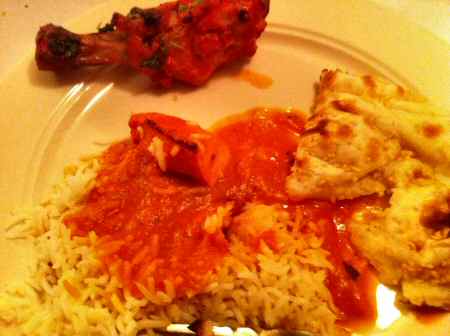 While we enjoyed all the vegetarian, Lamb and Chicken items what irked us a bit was the partially cooked Garlic Naan and the burnt Plain Naan bread.

Believe us, the Kheer Pista was not for mere mortals. 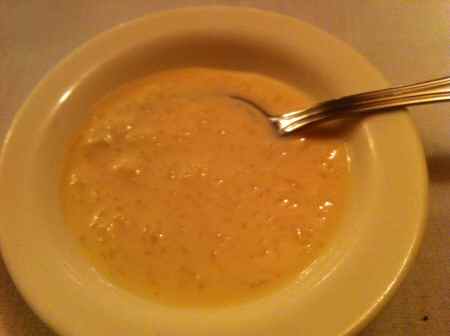 Kheer Pista
Maybe it was an accident that it landed on our plate. Or is it possible that we are unlike y&#39all and possess some divine qualities? ;)

Medium thick, smooth, cold but not freezing cold, we were certain that it was ambrosia, the food of the Gods.

Throwing all calorie concerns to the wind, we gormandized and gormandized until we couldn't gormandize any more.

Our order of Masala Chai came hot to the table and, by God, for once we got the real deal - a blend of Indian spices, tea leaves, milk, water and sugar.

Rarely have we had such good Masala Chai. A must-have at Dishes of India.

While the food was decent despite being mildly spiced, what disappointed us was the spotty service.

When we walked in around 11:08 a.m., the dining hall was empty - no diners and no wait staff either. We waited patiently for a waiter to show us a table. After about two minutes of wait, we saw a Hispanic looking waiter busy adjusting his bow tie emerge from the kitchen. Without any greeting, the c*nt showed us to a table.

Aghast at the cold reception, we were adjusting the chairs to plonk our derrieres into it when a tall dark desi waiter (from Delhi?) walked over with a pleasing smile pasted to his face and asked us whether we wanted to drink anything. Being cheap desi bastards, we politely declined and proceeded with our lunch.

They removed the first set of used plates promptly and then ignored the subsequent sets. As the table was getting cramped with used plates, we deposited them on the adjacent clean table. ;)

Also when we pointed out that our order of Garlic Naan was partially cooked and very raw in the middle, the same tall desi waiter just nodded a OK and took the bread back without as much as offering us his regrets. Aren't we paying for the food, chutiya? Show some remorse!

After about five minutes he brought another set of Garlic Naan just as we were finishing up our meal. The second set was again partially cooked and had a raw flour taste in the middle. This time, however, we kept quite as we saw no point in raising the issue again and vowed never to order Garlic Naan again at Dishes of India.